1. Welcome and Apologies for Absence – The Chairman welcomed those present to the Meeting. An apology for absence was received from Councillor Patten.

2. Declaration of Interests – There were no declarations of interest made.

3. Minutes of the Last Meeting held on the 3 July 2017 – These Minutes were received, considered and approved by the Committee, following the vote. (Copy in Minute Book).

5. Members of the Public – A Resident in Dobbs Lane attended to make the Committee aware that the Enforcement – Breach of Planning Permission – 79 Dobbs Lane – that the LPA had given the applicant 28 days to make a retrospective Planning Application for what has been built as opposed to the originally approved application (The Town Council has not received a copy of the revised plans). The Resident reported that an officer of the LPA has informed the applicant that the revised application still does not reflect the size and layout of the current building and he has been asked to present a new set of plans that do reflect what has been built. The point the resident was trying to make is that the system seems to favour the developer in that they are able to submit an application that is changed from the original approved plans and that but for the neighbouring residents having the time, confidence and ability to point out the breaches and inform the LPA, that the developer is given more than one chance to put in a revised retrospective Planning Application. He is frustrated that Building Control and Building Regulations sections do not work in conjunction with each other.

7. Schedule of Applications/Proposals – The Committee considered and made its formal comments/recommendations to the Local Planning Authority – (LPA). (Copy in Minute Book). 2

8. Schedule of Planning Decisions – The Committee noted the updates. (Copy in Minute Book).

9. Referral to Planning Committee of the LPA (Local Planning Authority) as opposed to Officer Delegated or The Planning Inspectorate – The Committee noted that there were no new updates.

11. Neighbourhood Plan Working Party – The Committee noted that the 3 public engagement meetings had been held. The number of those engaged with did not meet the 1% target. The NP Committee were therefore discussing at their meeting at 7.15pm on 17 July, whether to plan further engagement meetings or use other methods of engagement.

14. Date of Next Meeting – The next Planning and Development Committee Meeting will be held on Monday, 31st July 2017 at 6.15pm.

15. Agenda Items for Next Meeting – Cllr Archer requested that a letter be sent to the LPA regarding the property at 79 Dobbs Lane to request a site visit. There being no other business, the Meeting closed at 6.45 pm.

Meeting held at 7.15pm on Teams Download the Agenda

Meeting held at 7.15pm on Teams 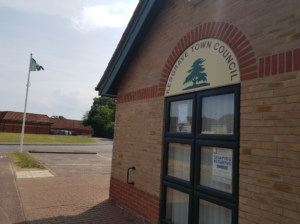 The Annual Town Meeting – a meeting for all local residents,  so that you can have your say and have the opportunity to take more ownership of your town.

Agenda of the Town Council meeting held at 7.15pm in the Council Chamber. Download the Agenda

Agenda of the Town Council meeting held at 7.15pm in the Council Chamber.